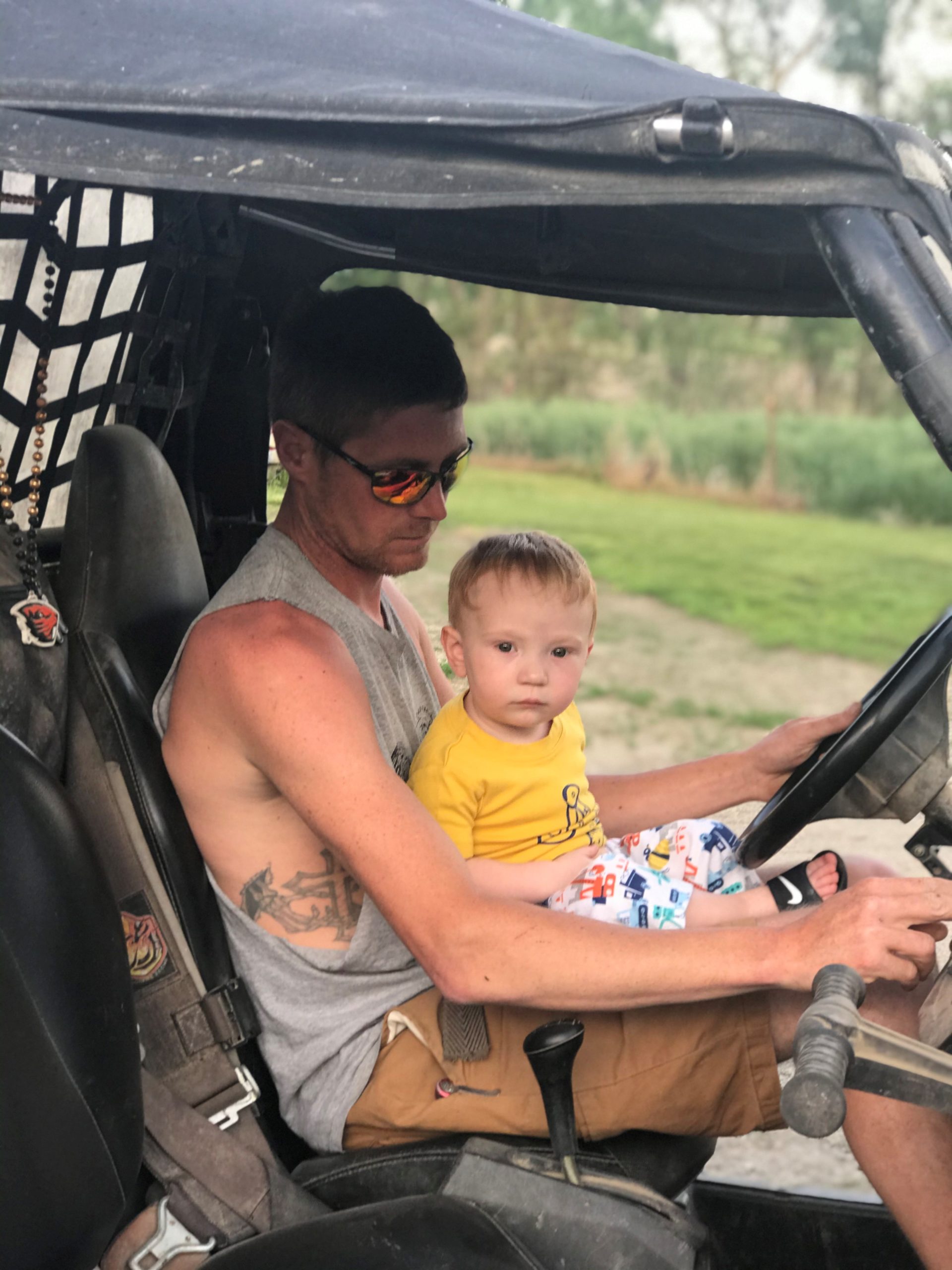 Kash Goeschel was born with a condition that very well may have saved his father’s life.

Almost immediately after he was born on Aug. 13, 2019, doctors noticed something not right about Kash’s oxygen levels, so they did an ultrasound or echocardiogram (“echo”) of his heart. Kash was transported via ambulance to Children’s Hospital & Medical Center in Omaha. 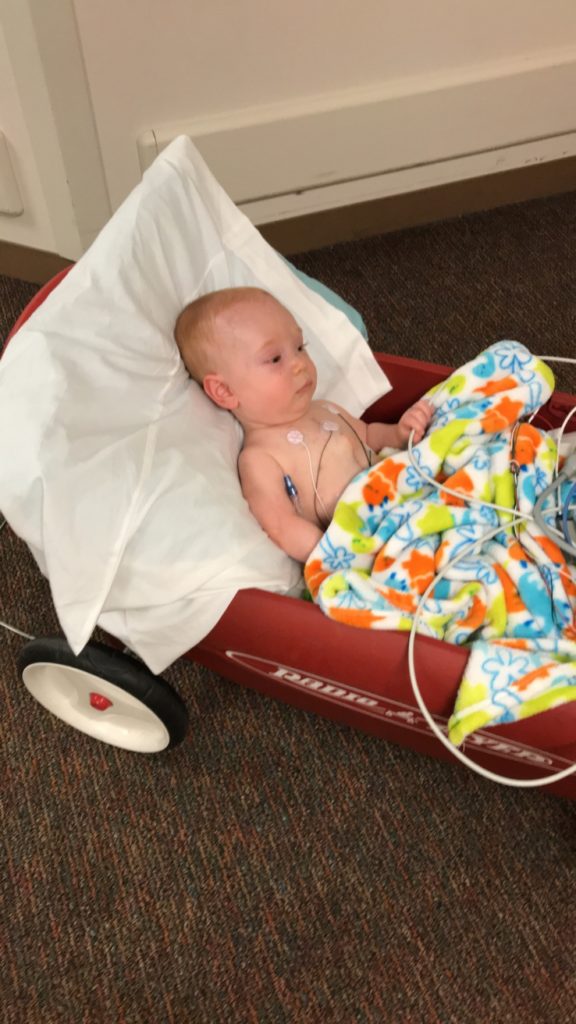 Upon arrival, Kash was admitted to the Neonatal Intensive Care Unit (NICU) for almost two weeks. While there, doctors discovered he had Tetralogy of Fallot (TOF), a congenital heart defect where oxygen-poor blood flows out of the heart and into the rest of the body. Babies born with this condition typically need one or two surgeries soon after birth.

“Tetralogy of Fallot is one of the most common forms of congenital heart disease that we see,” said Jonathan Cramer, M.D., a pediatric and adult congenital cardiologist at Children’s. “At children’s hospitals like ours, and in the collective congenital heart community, we have been fixing TOF for nearly five decades.”

Doctors wanted to give Kash some time to grow before his first surgery, so they sent him home. At home, though, his oxygen levels would dip dangerously low, so his care team decided to proceed with surgery. In October, he had a transannular patch placed to cover the wall of the right ventricle and widen the pulmonary artery and pulmonary valve.

Things seemed to be moving in the right direction until Valentine’s Day of 2020. During a routine echo and checkup, they determined Kash had had a pulmonary aneurism, and he was sent back to Children’s for emergency surgery.

“Kash was recovering, but not at the level doctors wanted him to,” said Haley Lierman, Kash’s mother. “They decided it was best to go ahead and do the surgery to completely repair the TOF during the same hospital stay.”

Ali Ibrahimiye, M.D., a pediatric cardiothoracic surgeon at Children’s, performed Kash’s surgery. Kash was hospitalized for 63 days and, all the while, received exceptional care and support from the clinical team.

“The nurses were great. I had one of the best experiences. They took the time to explain everything thoroughly and kept me informed,” said Haley. “And their interactions with us meant even more since Kash was hospitalized during COVID-19, and visitors were restricted. The nurses were great company since I was by myself a lot of the time.”

Kash was recovering, and he and Haley were looking forward to going home. Before being discharged, though, his doctors noticed Kash also had a narrowing of his superior vena cava (SVC), the central vein that leads to the heart. Fortunately, the placement of a few stents was all that was needed to open his SVC, something he was used to with his previous surgeries.

Dr. Ibrahimiye vividly remembers the day Kash was being discharged. Kash’s dad, Jake Goeschel, was also at the appointment, and Dr. Ibrahimiye noticed something that would change Jake’s life forever.

“I remember Jake was wearing a t-shirt that day, and I saw a sternotomy scar,” said Dr. Ibrahimiye. “I asked him if he had had heart surgery, and he explained that he did as a kid but didn’t know much about it. When I grabbed my stethoscope to listen to his heart, I heard a loud murmur.”

Indeed, Jake, like his son, had surgery on his heart when he was young. He hadn’t had a checkup since high school, and since his parents had passed away, he wasn’t able to ask them any questions.

“I had routine checkups, but really didn’t think anything of it until Kash was born with his heart issues,” said Jake. “Given Kash’s diagnosis, I concluded that maybe I also had TOF and didn’t notice it growing up. ” 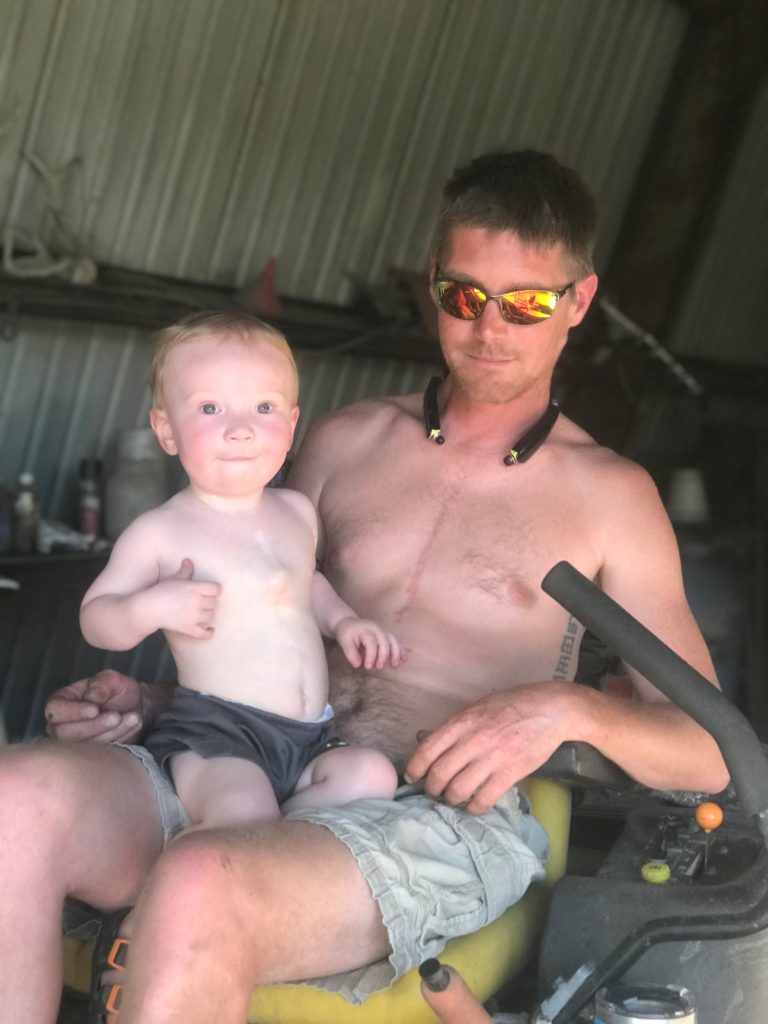 Jake said he would occasionally feel his heart fluttering, but ignored it because he had no other symptoms.

“I encouraged Jake to get checked out by Dr. Cramer in the Adult Congenital Heart Disease (ACHD) clinic at Children’s because I knew if he didn’t take this seriously, it could cause him serious problems in the future,” explained Dr. Ibrahimiye.

Like Jake, the vast majority of babies born with even the most complex heart defects are surviving into adulthood. These adults often require continued monitoring, care and follow-up treatments throughout adolescence and adulthood, which is why Children’s has invested so much into its ACHD program.

“There are about 35 Centers of Excellence across the entire nation focusing on adult congenital heart disease, and we were one of the first 15 to be certified,” explained Dr. Cramer. “At Children’s, we have been doing this for longer than anyone in our region. We have patients that will show up in our clinic in their 40s, 50s and even 60s, and we are dedicated to helping these patients understand their condition and optimize their health.”

Thanks to the guidance from Dr. Ibrahimiye, Jake did follow up with the ACHD clinic and completed some tests. His suspicion was confirmed: like Kash, he had TOF.

“What is really interesting is how rare it is to see a father and son who both have this specific condition because it is not a genetic condition that is passed down. This is something I rarely see,” said Dr. Cramer.

Jake would need surgery to keep his oxygenated-blood and non-oxygenated blood from mixing, and more urgently, because there was nothing left of one of his heart valves. Because of Children’s nationally accredited ACHD program, Jake was able to have surgery where his son had undergone so many operations.

“In December 2020, I performed Jake’s surgery almost a year after performing a similar surgery on his son. It is extremely rare in my career to do the same surgery on both a father and a son, but I was honored that Jake trusted me to take care of this for him,” said Dr. Ibrahimiye. “As a father myself, it means so much to know we caught this in time and that we have given Jake and his son many more years together.”

Jake’s surgery was a success, and the fluttering sensations Jake felt most of his life were gone.

Both Dr. Ibrahimiye and Dr. Cramer believe that by doing this surgery and caring for Jake in the ACHD clinic, decades may have been added to his life.

Today, both father and son are doing well. Kash is having fun exploring life as a toddler, while his dad looks on, grateful that they are both here.

“If it weren’t for the birth of my son, I might have never figured out that I had the same condition and taken action,” said Jake. “Kash is a precious gift to our family and was able to help in such an unexpected way.”

To learn more about the Adult Congenital Heart Disease program in collaboration with the University of Nebraska Medical Center, please visit ChildrensOmaha.org/Heart. 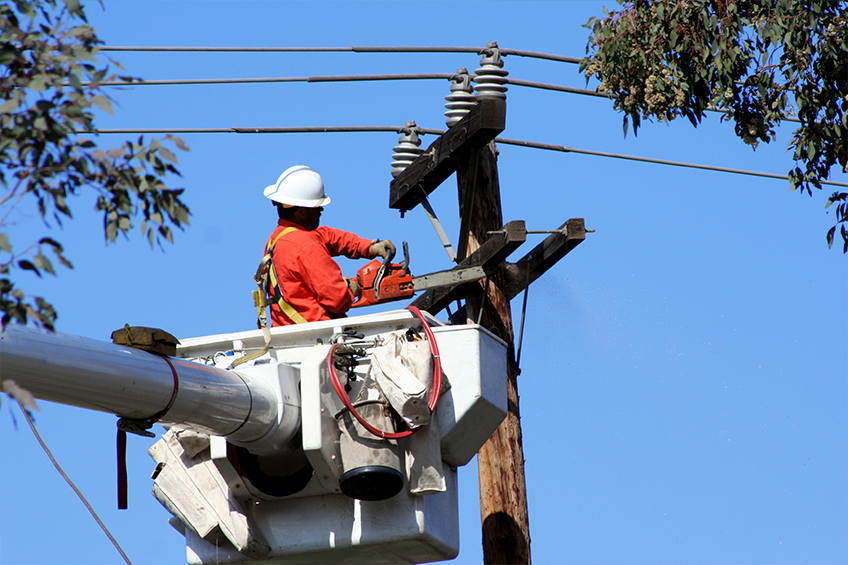 After storms overnight, three Children’s Physicians offices—Bellevue, Creighton and Dundee—are without power this morning. Our team is working diligently to contact families and transition appointments today to clinics with power; however, phone and internet issues are making this process slower. Please do not arrive at these clinics for visits, and we will do our best […]
Read More 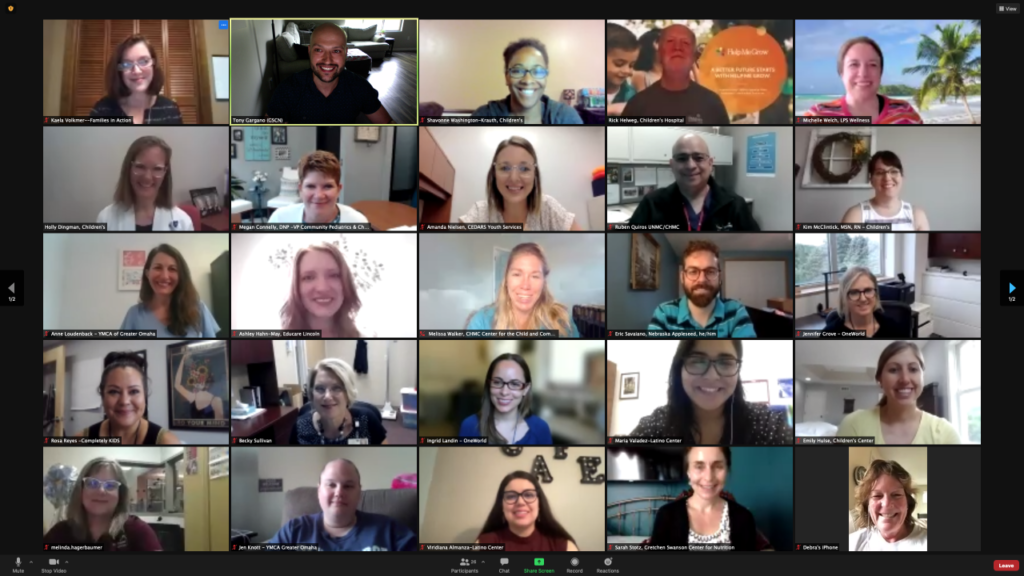