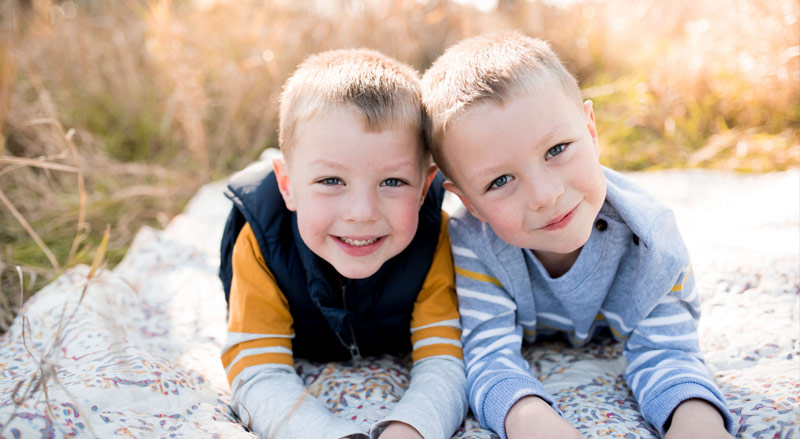 Heart Mom: My Hope For My Twins With Congenital Heart Defects

When my husband and I found out we were having twins, it was a complete surprise. And most of my pregnancy was great. All of the prenatal appointments were fine and there were no real issues — until I went for my 32-week checkup at my local hospital in Lincoln.

At that appointment, there was some concern with the size of the twins. The doctors thought their growth wasn’t normal, and they suggested I see a high-risk pregnancy specialist.

I went to the specialist that same day. At that point, the medical team could tell that the smaller baby was having some heart issues, but they weren’t sure exactly what those issues were.

Just in case the twins had to be delivered early, the doctor gave me steroid shots to speed up their lung development, and I was put on hospital bedrest.

A few days later, an ultrasound showed that both boys were under stress. The medical team recommended an early delivery, so Levi and Dylan were born at 32 weeks.

They were both taken off to the neonatal intensive care unit (NICU) right away. I didn’t think much of it at first. I knew that might happen because they were born early. But after several hours had passed, I began to worry that something was wrong.

Then a cardiologist came in and told Zach and me that both boys had congenital heart defects. The doctors weren’t sure exactly what the extent of the defects was. They decided to send us to Children’s Hospital & Medical Center in Omaha. The boys were only a few hours old.

At Children’s, both boys were diagnosed with pulmonary atresia: Their pulmonary valves were closed at birth when they should have been open so that blood could pump to the lungs. This is not something that can typically be detected using an ultrasound, which is why prenatal diagnosis would have been difficult.

That’s when we found out that the boys would need surgery in the next few days to correct their congenital heart defects.

Levi had the surgery first, at 3 days old. He was only 4 pounds. Because he was so small, the medical team had to do a hybrid surgery that was somewhere between a balloon catheterization and open-heart surgery. Fortunately, the procedure went pretty well and he did not have to be put on the bypass machine.

But Dylan was even smaller than Levi — only 3 pounds, 6 ounces. And he had a bleed on his brain that had to clear up before he could have the surgery. It was an extremely scary time, but, fortunately, the bleed cleared up on its own and he had his surgery when he was 7 days old.

Dylan’s surgery was more complicated because he also had another heart defect: coarctation, or narrowing, of his aorta — the big blood vessel that carries blood from the heart to the rest of the body. The surgery took 7 or 8 hours, and he had to be put on the bypass machine throughout it.

After we were all settled in at home, the twins just needed regular checkups with their cardiology team at Children’s. Both boys seemed stable. Neither was getting worse.

But Levi continued to have low blood oxygen saturation numbers, which basically meant he didn’t have enough oxygen in his blood. His skin had some blueness to it.

We knew he would eventually need a second surgery to correct this, and we decided with his medical team to go forward with the procedure in September 2014, when he was 2 years old.

Levi’s second surgery was a success. Both boys are in preschool now and doing well. They’re learning to ride bikes, playing outside with their friends, and doing things just like other kids their age.

My Biggest Hope For My Twins With Congenital Heart Defects

The boys go to Children’s yearly to check their progress. It’s very likely they’ll have to have additional surgeries in the future. But for now, things are going great.

My greatest hope — and I think my husband, Zach, would echo this, too — is for the boys to continue to be able to just be kids. We want them to do things other boys their age do as they grow up.

That’s the number one hope for us, one that many parents want for their children: that they will continue to be able to feel and act and grow up as normally as possible. For us, that will mean a fun holiday season, a happy New Year, and a great future for them.

Thank You for Sharing this page.