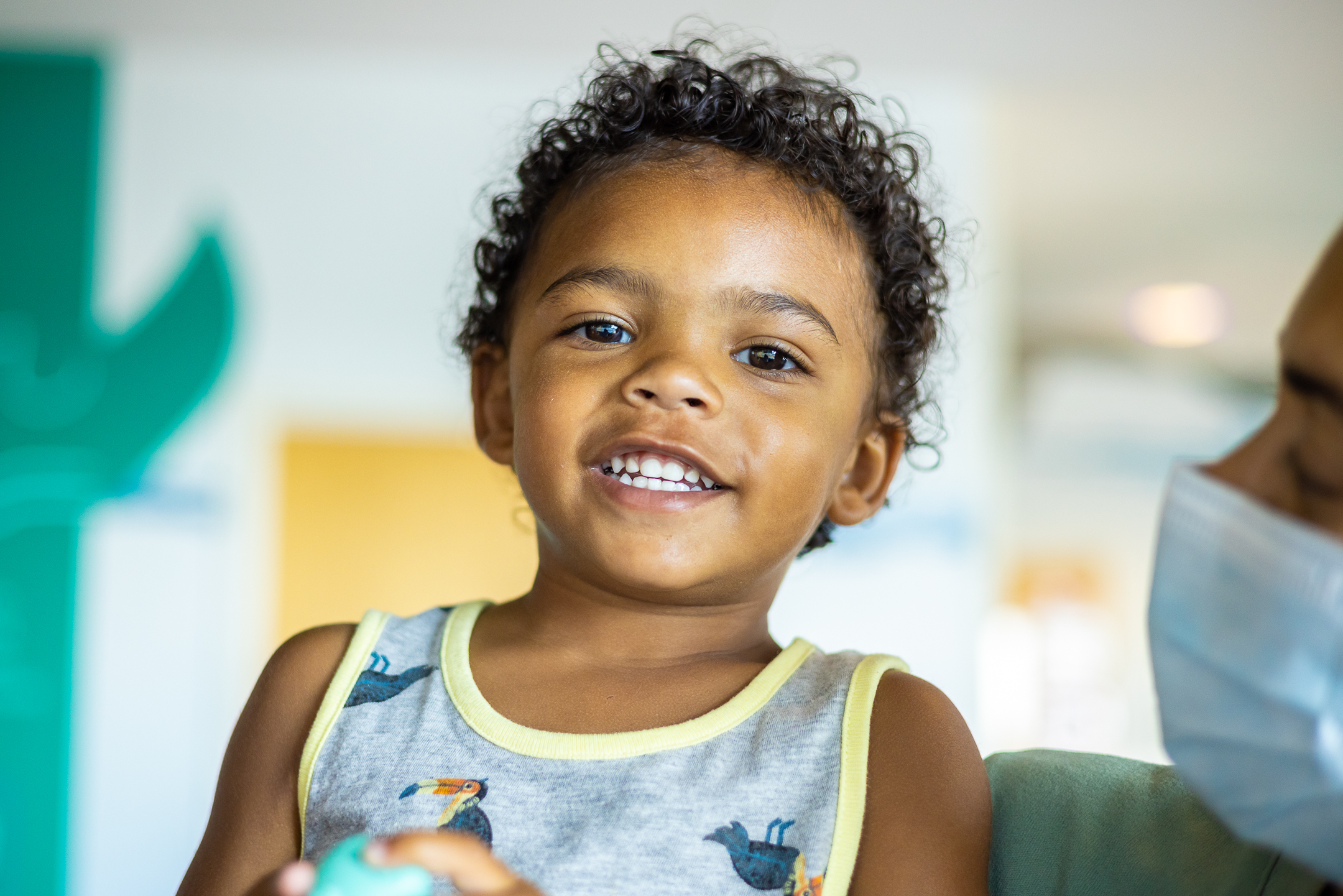 Kristin and Monét McCullen revel in the indescribable joy that comes with being parents to their 9-year-old daughter, Adrianna, and their 2-year-old twins, son Mathís and daughter Landry.

“The twins love doing everything together,” said Monét. “They have their distinctive personalities. However, when learning to crawl, stand and walk, Mathís was always behind Landry on every milestone. Mathís managed to get there – just not as fast as his twin sister. As parents, we kept reminding ourselves that they are two different humans, and they do everything on their own timelines.” 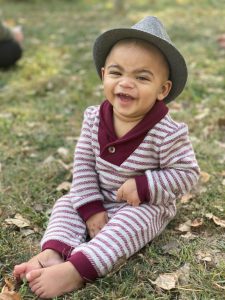 When Mathís was a little over a year old, the McCullens, who are from Omaha, noticed a ridge on their son’s forehead. It did not seem to bother Mathís, and the McCullens weren’t too concerned. They thought it was a minor imperfection their son was born with, until a family in one of their online parenting groups reached out to them.

“Since we used an anonymous sperm donor to get pregnant, we signed up for a group where you can connect with other siblings who have used the same donor,” said Monét. “We posted a picture of Mathís and Landry, and one of the moms of the siblings messaged me and told me that she noticed Mathís had a small ridge on his forehead. Her son had the same ridge too. It turns out that five of the sibling boys had a noticeable ridge as well. Based off this information, we brought the concern to our pediatrician, Dr. Sahra Niazi, to get it checked out.”

“Monét and I weren’t too concerned about the ridge,” added Kristin. “When we took him for his well checkup with his pediatrician, Dr. Niazi measured his head circumference like she did at every appointment to ensure it was growing properly. Three months after his prior appointment, we noticed Mathís’ head circumference didn’t grow. Dr. Niazi encouraged us to get a second opinion and referred us to Children’s Hospital & Medical Center.” 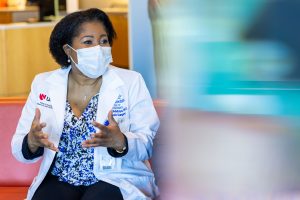 In August 2021, Kristin and Monét met with Dr. Oluwaseun (Seun) Adetayo, chief of pediatric plastic surgery, who specializes in pediatric craniofacial surgery. Dr. Adetayo explained that “sutures” are like flexible joints that connect the several bony plates of the skull. The metopic suture connects the two forehead bones and the bridge of the nose. Sutures allow the baby’s head to fit through the birth canal during delivery and the skull to expand as the brain grows.

In Mathís’ case, the two bony plates in front of his skull fused together too early, creating the ridge. Besides the ridge on his forehead, Dr. Adetayo also noticed slight bulging over his ears. She explained that since the metopic suture is the first one to close in the skull, the presence of a metopic ridge does not necessarily mean that a child has metopic craniosynostosis. The latter requires surgery, but the former does not.

After a full examination of Mathís, Dr. Adetayo integrated his history and physical exam findings with his developmental and sibling histories. She also wanted to perform a genetic panel and a CT scan to evaluate the sutures internally, watching for signs that it was metopic craniosynostosis (requiring surgery) versus metopic ridge (no surgery needed). The factor of Mathís’ other donor siblings having metopic ridge also raised a red flag for Dr. Adetayo to ensure there were no other sutures in the skull closing prematurely, because syndromic or genetic craniosynostosis could affect other sutures.

“We were so happy to have wonderful providers who took our concerns seriously,” said Kristin. “They were willing to put in the extra effort to explore Mathís’ condition even if there wasn’t anything glaringly obvious. Although our son was meeting his milestones – though delayed – and his ridge was extremely mild, Dr. Adetayo wanted to confirm that nothing else was wrong with Mathís’ metopic suture or any of his other sutures. She ordered a head scan, and I am so glad that she did.”

The results showed that not only was his metopic suture fused in his forehead, but his sagittal suture that extends from the front of the head towards the back was completely fused.

“Mathís had a condition called sagittal craniosynostosis, a defect that causes the sagittal suture to close earlier than normal, resulting in a head deformity,” explained Dr. Adetayo. 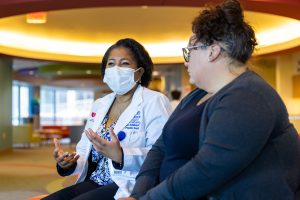 According to Dr. Adetayo, the combination of the conditions limits the skull’s ability to grow. When the bones fuse early, the skull stops growing in those areas, and over time, it puts extra pressure on the brain growth, leading to early developmental delays in otherwise normal children like Mathís. It is even more common in a case like Mathís where the head shape looks normal because there is not enough compensation at other sutures, which is called normocephalic craniosynostosis.

“These are cases that I see that are easily missed because the head shape is not obviously abnormal,” said Dr. Adetayo. “I applaud Mathís’ parents and pediatricians for getting him to our offices. This is why it is so important to have a craniofacial specialist examine such cases.”

“I remember when Dr. Adetayo shared the results of the scan,” said Monét. “She told us that they could see his sagittal completely fused and that he would need surgery. The thought of our son going through this invasive skull reconstruction surgery at such a young age brought me to tears. I was sad, but grateful that we caught this early. We scheduled an appointment to discuss the specifics of the surgery, and we prepared for the worst but hoped for the best. Dr. Adetayo and her team, along with Dr. Arnett Klugh, Children’s chief of pediatric neurosurgery, were both upfront and guided us through every step of the process.”

Collaborating for a life-changing surgery 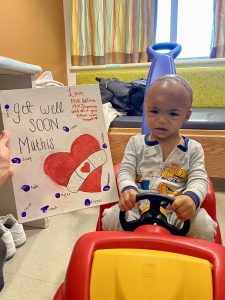 Just before his second birthday, Mathís had skull surgery on Nov. 3, 2021. The six-hour operation involved making an incision along his scalp, opening up and removing the top half of his skull and separating the skull from the dura and opening to his brain. After removing the affected bone, Dr. Klugh and Dr. Adetayo reshaped and replaced the bone to improve Mathís’ head shape and allow more room for his growing brain to expand normally.

“It is a scary thing for parents when a child must undergo surgery. We did our best to walk the family through the process each step of the way, and they were really brave,” said Dr. Adetayo. “Success takes a team, and we are excited about the team we have assembled at Children’s to take care of children like Mathís. Ranging from our front desk team, nursing staff, surgery schedulers and advanced practice providers, our goal is to provide each child with top-notch care with compassion and innovation.”

“It’s a big deal, removing your 1-year-old child’s skull and literally getting down to the brain,” said Kristin. “After his surgery, Mathís went to the Pediatric Intensive Care Unit to recover. When he heard our voices, he opened his eyes a little. His entire head was completely wrapped. It was hard seeing him in that state, but we were glad that he was doing well after his surgery and got to go home.”

Seven months after his procedure, Mathís is doing remarkably well. Soon after surgery, Kristin and Monét noticed a big difference in his language and speech. Mathís was talking and eating better, and he carried himself more confidently. His curly hair grew back after the surgeons used a zig zag cut to help camouflage the scalp incision, which is now barely visible. For the McCullens, they are thankful to the wonderful team who took exceptional care of them and their son. 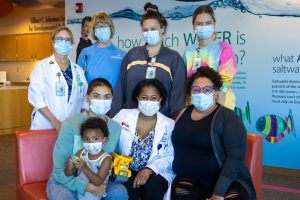 “Dr. Adetayo and Dr. Klugh took every moment and opportunity to educate us, which went a long way in building our trust and confidence in them,” said the McCullens. “We could tell how much Dr. Adetayo was plugged into the latest research on our son’s condition. That cemented our final decision to go to Children’s for the procedure, as we had also consulted with another hospital for a second opinion.

“The nurses here were so accommodating and attuned to the process and met our needs along the way. The team made it clear to us that their focus was not just taking care of Mathís, but also taking care of our family. Our confidence in the care we received could not have been higher. We are their biggest fans. In my mind, we could have gone across the world, but the absolute best care team for our son was just down the street.”

At Children’s Hospital & Medical Center, we understand that birth defects or traumas can be difficult and overwhelming — especially when they are visible or affect a child’s development. Our specialists are here to help children ages 0 to 21 through all of their plastic surgery needs.